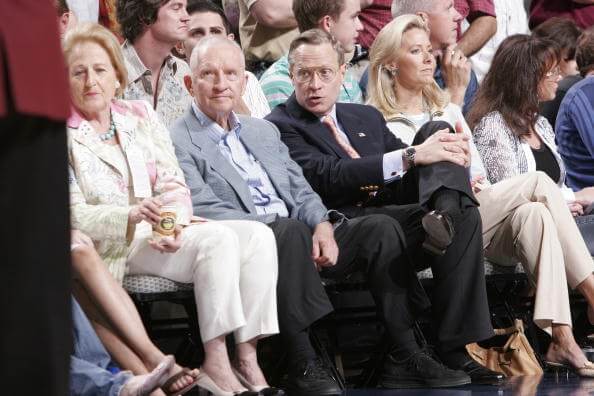 Perot purchased the Dallas Mavericks NBA basketball team from original owner Don Carter in March 1996. Under his four-year tenure, the Mavericks made no more progress on the court as they had in Carter’s final seasons, and nowhere near what they would do under his successor, Mark Cuban; it was said that he was a basketball novice, or disinterested in the sport and was using his position as team owner to front his projects, most notably Victory Park, which was anchored by the American Airlines Center which opened in 2001. He sold the team to Cuban in January 2000 and the franchise has not had a losing season in the 15 full seasons afterward, winning two Western Conference championships and the 2011 NBA Finals.

In May 2010, Perot, who retained 5 percent ownership, filed a lawsuit against Cuban, alleging the franchise was insolvent or in imminent danger of insolvency. In June 2010, Cuban responded in a court filing maintaining Perot is wrongly seeking money to offset some $100 million in losses on the Victory Park real estate development. The lawsuit was dismissed in 2011, due in part to Cuban asserting proper management of the team due to its recent victory in the 2011 NBA Finals.[20] In 2014, the 5th Circuit Court affirmed that decision on appeal. Following his initial defeat, Perot attempted to shut out Mavericks fans from use of the parking lots he controlled near the American Airlines Center.

Perot retains a minority stake in the team to this day, as does his predecessor Carter.