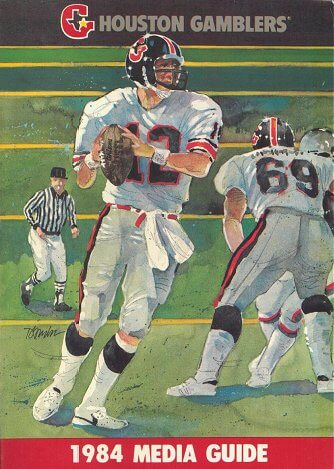 Run & Shoot advocate and chief refiner Darell “Mouse” Davis was hired by the progressive Pardee to install the offense as the team’s Offensive Coordinator. (Davis was a former head coach at Portland State University where he developed the St. Louis Cardinals 2 time Pro Bowl QB Neil Lomax.) Led by former Miami Hurricanes QB Jim Kelly (who snubbed the NFL’s Buffalo Bills to play in the USFL) the Gamblers wrecked secondaries across the USFL, getting national media attention in demolishing the league’s single season scoring record. (The Gamblers scored 618 points in 1984. The 1983 USFL record was 456.) Kelly became the USFL’s answer to the NFL’s Dan Marino, and the league’s second superstar player (after Herschel Walker).

The Gamblers also got the attention of a few NFL teams. The run & shoot offense would be adopted as the base set for the Detroit Lions, Atlanta Falcons and the Houston Oilers. All 3 teams were in the upper half of the league in scoring while using the run & shoot. In spite of this fact, the offense was widely discredited as a gimmick in the NFL when none of the 3 teams won a Super Bowl. Even after those teams moved away from the run & shoot as their base sets, the influence of Mouse Davis and Jim Kelly left a lasting impact on the league. In the 1970s most teams ran the 2 back “pro-set” as their base offense with fixed routes. Today, almost all NFL teams incorporate extensive packages of 4 WR sets and option routes for WRs depending on coverages faced, innovations that are the basis of the run & shoot.