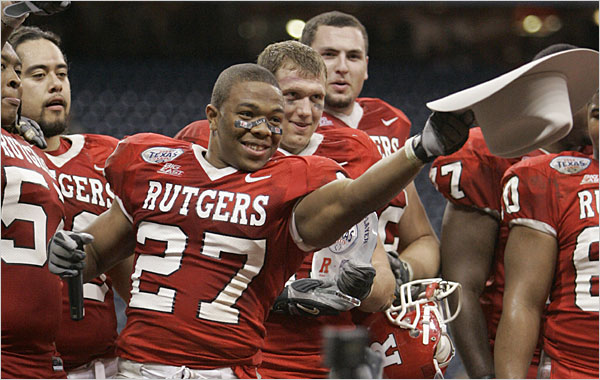 As a sophomore, Rice gained 1,794 rushing yards with 20 touchdowns. His rushing totals set Rutgers’ single-season rushing yardage record, shattering J. J. Jennings’ mark of 1,353 set in 1973. Rice’s backfield partner during his freshman and sophomore seasons was fullback Brian Leonard. Leonard considered entering the NFL Draft in 2006 but stayed for his senior year and took on a less prominent role in the offense which aided Rice’s rise to stardom. Rice was a finalist for the Maxwell Award and finished seventh in the Heisman Trophy voting. Rice was named Big East offensive player of the week a school-record three times in 2007. All three times, Rice rushed for over 200 yards, 201 yards against North Carolina, 202 yards against South Florida, and a career-high 225-yard game against the Pittsburgh Panthers. Rice ended his sophomore season with 170 yards on 24 carries with one touchdown during the inaugural Texas Bowl to give Rutgers its first bowl victory ever in a 37–10 win over Kansas State. He was named MVP of the game.

Rice was widely considered a candidate for both the Maxwell Award and Heisman Trophy in 2007.

On October 6, 2007, against the Cincinnati Bearcats, Rice scored his 35th career rushing touchdown, which set the all-time program record. On November 9, 2007, against the Army Black Knights, Rice ran for 243 yards and scored twice in the 41–6 victory, setting a new school record previously set by Terrell Willis in 1994, and his new single-game record. On January 5, 2008, at the second annual International Bowl in Toronto, Rice ran for a new school record of 280 yards, along with four touchdowns as Rutgers defeated Ball State 52–30. One of the touchdown runs (90 yards) was the longest of his career. Rice won the MVP award for his performance. Following the season, Rice declared his intention to enter the 2008 NFL Draft.