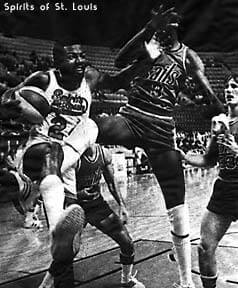 After the Sails’ demise, the club’s roster was put out to auction among the ABA’s eight remaining clubs. Guard Bo Lamar, and big men Mark Olberding and Dave Robisch were the only Sails players to receive bids. The exception was the team’s best player, All-Star center Caldwell Jones. ABA Commissioner Dave DeBusschere held Jones out of the auction as a “special case”. His contract was sold to the Kentucky Colonels in a separate transaction shortly thereafter.

The ABA’s troubled 1975 – 1976 season ground on. The Utah Stars folded three weeks after the Sails on December 2, 1975 – the third ABA franchise to fold since the opening of training camp in October. The league folded in the spring of 1976, after four of the surviving seven teams were admitted via merger into the NBA.