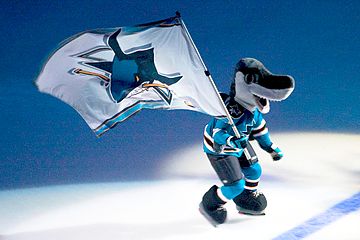 The Oakland Coliseum Arena was home to the California Golden Seals of the NHL from 1967 to 1976. Gordon and George Gund III became minority owners of the Seals in 1974, and were instrumental in their move to Cleveland in 1976 and a 1978 merger with the Minnesota North Stars, which they purchased that year. They had long wanted to bring hockey back to the Bay Area, and asked the NHL for permission to move the North Stars there in the late 1980s, but the league vetoed the proposed move. Meanwhile, a group led by former Hartford Whalers owner Howard Baldwin was pushing the NHL to bring a team to San Jose, where a new arena was being built. Eventually the league struck a compromise: the Gunds would sell their share of the North Stars to Baldwin’s group, with the Gunds receiving an expansion team in the Bay Area to begin play in the 1991 – 1992 season and being allowed to take a certain number of players from the North Stars to their new club. In return, the North Stars would be allowed to participate as an equal partner in an expansion draft with the new Bay Area team.

On May 5, 1990, the Gunds officially sold their share of the North Stars to Baldwin and were awarded a new team for the Bay Area, based in San Jose.