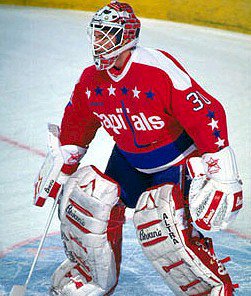 By the summer of 1982, there was serious talk of the team moving out of the U.S. capital, and a “Save the Caps” campaign was underway. Then two significant events took place to solve the problem. First, the team hired David Poile as General Manager. Second, as his first move, Poile pulled off one of the largest trades in franchise history on September 9, 1982, when he dealt longtime regulars Ryan Walter and Rick Green to the Montreal Canadiens for Rod Langway (named captain only a few weeks later), Brian Engblom, Doug Jarvis, and Craig Laughlin. This move turned the franchise around, as Langway’s solid defense helped the team to dramatically reduce its goals-against, and the explosive goal-scoring of Dennis Maruk, Mike Gartner, and Bobby Carpenter fueled the offensive attack.