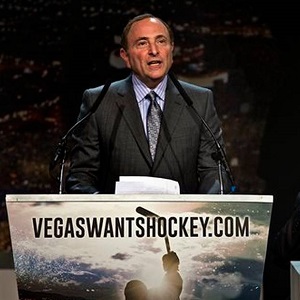 On December 8, 2014, following a meeting with the NHL’s board of governors, commissioner Gary Bettman announced that he would not object to Foley holding a season-ticket drive to gauge interest in a Las Vegas team, indicating the possibility that the league may actually consider a Las Vegas team. However, Bettman also warned the media to “[not] make more out of this than it is.” During an interview with Hockey Night in Canada’s Elliotte Friedman aired on December 13, 2014, Foley revealed that Wayne Gretzky was acting as an “unofficial” advisor to the proposed team.

On February 10, 2015, the season ticket drive began, with interested parties placing ten percent deposits on season tickets for a prospective team at the new arena by the 2016–17 season. 5,000 season ticket deposits were collected by Hockey Vision Las Vegas, an organization representing the Bill Foley and the Maloof families as owners of the potential franchise, bringing the ticket drive 50 percent of the way to the self-determined goal of 10,000 deposits. By April 2015, the drive had met its goal; Hockey Vision Las Vegas then began to solicit corporate and casino ticket sales to reach a supplemental goal of 13,000 total season ticket sales for the team’s inaugural season.