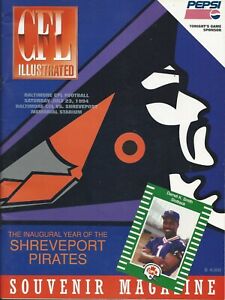 The Pirates were created when Bernard Glieberman and his son Lonnie, owners of the Ottawa Rough Riders, expressed a desire to move the struggling franchise to the United States. The CFL rejected this move but engineered a deal in which the Rough Riders were essentially split in two. The Gliebermans received an expansion franchise in Shreveport, while a new ownership group took over the Rough Rider’s name, colors, and history.