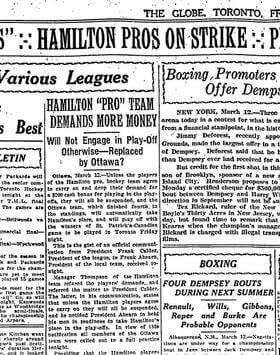 Thomas Duggan of Montreal, owner of the Mount Royal Arena, held two options for expansion teams in the United States. He sold the first of the two to Boston grocery magnate Charles Adams, who used it to start the Boston Bruins. He sold the second to a New York bootlegger named “Big Bill” Dwyer for a team to play in New York. At the NHL league meeting of April 17, 1925, Dwyer was granted an expansion franchise for New York.

Although Dwyer wished to purchase the Hamilton players, for a little while it seemed that Hamilton might remain in the NHL as Abso-Pure talked about building a new arena. The arena was not built and Dwyer bought the rights to the Tigers’ players from Thompson for $75,000, and gave the players raises, some as high as 200% of their previous salary. Dwyer’s team was for a time known as the “New York Hamilton Tigers” by the time it reached training camp, but this was changed to the New York Americans. The Hamilton franchise was officially revoked at the September 22 league meeting in the same year, and the matter of the players’ suspensions and fines dropped with little additional comment. Although Dwyer was ostensibly the owner, due to his underworld ties he was not publicly named by the NHL at the meeting announcing the team. Instead, Colonel Hammond of Madison Square Garden, Duggan, and former Ottawa manager Tommy Gorman were announced as the officers. Although the Americans’ roster was composed almost entirely of the former Tigers players, despite popular misconceptions to the contrary, the NHL does not consider the Americans to be a continuation of the Bulldogs/Tigers franchise.