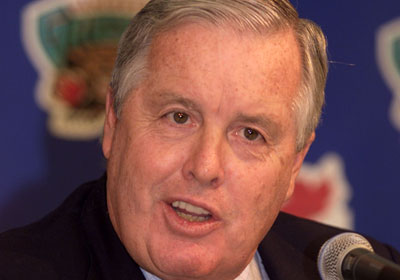 Financially, the lockout that occurred in 1998 was the turning point for the team. Attendance plummeted from a league average of 16,108 in the 1997 – 1998 season to 13,899 in the 1999 – 2000 season, which was the third-lowest in the league. Orca Bay started losing money on operations, in part because of a weak Canadian dollar.

Griffiths sold Orca Bay to Seattle-based John McCaw, Jr. in 1995 and 1996. In September 1999, McCaw announced the sale of the Grizzlies, but not the arena or the Canucks, to NHL’s St. Louis Blues-owner Bill Laurie for US$200 million. He stated that he intended to move the Grizzlies to St. Louis, but the transaction was stopped by the NBA.

Instead, McCaw sold the team to Chicago-based Michael Heisley for US$160 million. At the time he stated that he intended to keep the team in Vancouver, but immediately started a process to find a suitable relocation city in the US. Cities considered for relocation of the team included Memphis, Nashville, Las Vegas, New Orleans, St. Louis, Anaheim, San Diego, Buffalo and Louisville. Despite the need for the construction of a new venue to house the team on a permanent basis, Memphis was announced as the recipient city (pending league approval) on 26 March 2001. The NBA Board of Governors approved the move on 4 July 2001.