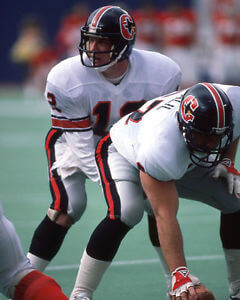 While the Gamblers had been a solid draw the year before, area fans were not about to abandon the Houston Oilers. Attendance dropped by almost 9,000 from 1984. The resulting financial problems were so severe that at one point, the Gamblers had trouble making payroll. They needed an advance from the league just to go to the playoffs. Although owner Jerry Argovitz had ultimately supported moving to the fall, he and his partners knew they could not even begin to compete with the Oilers and decided to get out. After briefly entertaining an offer to move to New York City, they agreed to sell the Gamblers’ assets to New Jersey Generals owner Donald Trump for an undisclosed amount. Since the deal included the Gamblers’ player contracts, it was widely reported as a merger. Trump immediately hired Pardee as coach. With an offense boasting Kelly and Walker, observers dubbed the new Generals the USFL’s “dream team.” Kelly was even featured on the cover of Sports Illustrated in a Generals uniform. That season however would never be played.