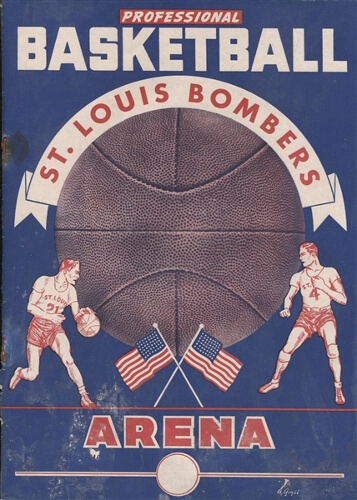 Coached by Ken Loeffler the St. Louis Bombers faced the Pittsburgh Ironmen on November 2nd in their first game at the St. Louis Arena on November 2nd, winning 56-51. The Bombers were able to get off to a fast start winning 11 of their first 14 games. Leading the way for the Bombers one of 11 charter teams in the Basketball Association of America was Guard Johnny Logan a second team All-Star who led the team in scoring with 12.6 points per game. The Bombers would battle the Chicago Stags all season for first place in the Western Division, losing a tie break at the end of the season, as they posted a record of 38-23. Facing the Philadelphia Warriors in the quarterfinals, the Bombers and Warriors split the first two games of a three game series, with each team winning on their own floor. However, despite Game 3 being at the St. Louis Arena, the Bombers would suffer a letdown losing 75-59 as the Warriors went on to win the league’s first championship.