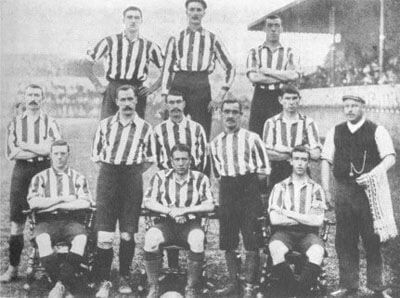 For the start of their League career, Saints signed several new players on professional contracts, including Charles Baker, Alf Littlehales, and Lachie Thomson from Stoke and Fred Hollands from Millwall. After winning the Southern League title in 1896 – 1997, the club became a limited company and was renamed Southampton F.C.

Southampton won the Southern League championship for three years running between 1897 and 1899 and again in 1901, 1903, and 1904. During this time, they moved to a newly built £10,000 stadium called The Dell, to the northwest of the city center in 1898. Although they would spend the next 103 years there, the future was far from certain in those early days and the club had to rent the premises first before they could afford to buy the stadium in the early part of the 20th century. The club reached the first of their four FA Cup Finals in 1900. On that day, they went down 4–0 to Bury and two years later they would suffer a similar fate at the hands of Sheffield United as they were beaten 2–1 in a replay of the 1902 final. Reaching those finals gave Southampton recognition, even internationally: in 1909, an Athletic Bilbao representative who played for Atlético Madrid traveled to Southampton and purchased 50 Saints shirts, which were shared between Athletic Bilbao and Atletico Madrid. This early Southampton popularity is the reason why both Spanish club colors (shirts and crests) became red and white, as they are nowadays.