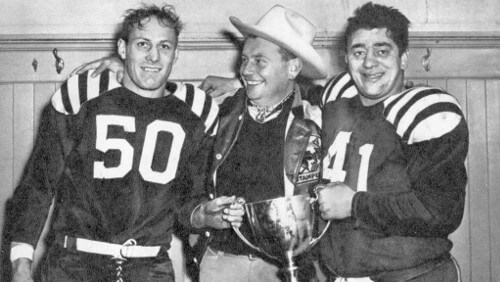 The WIFU returned to Calgary on September 29, 1945 with the formation of the Calgary Stampeders. In their very first game played on October 20 at Mewata Stadium they beat the Regina Roughriders 12–0 before 4,000 fans in attendance. It was a taste of success to come that decade under the direction of head coach Les Lear and talented stars such as Woody Strode, Paul Rowe, Keith Spaith, Dave Berry, Normie Kwong and Ezzert “Sugarfoot” Anderson.