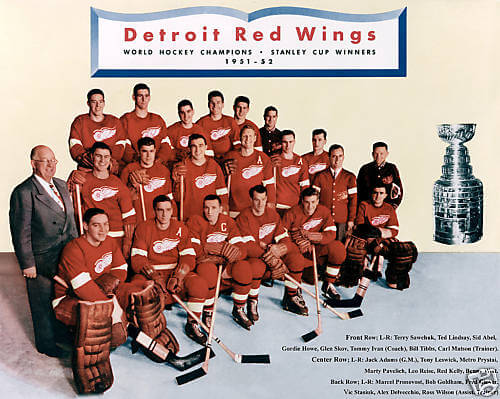 Stanley Cup – 1952
The 1952 Stanley Cup Final NHL championship series was contested by the Detroit Red Wings and the Montreal Canadiens in the first of the four Detroit-Montreal Final series of the 1950s. The Canadiens were appearing in their second straight Finals series, while Detroit was returning after winning the 1950 Final. The Red Wings would win the series 4-0, shutting out the Canadiens twice and allowing one goal in each of the other two games. By doing so, the Red Wings became the first team to go perfect in the playoffs.

Stanley Cup – 1950
The 1950 Stanley Cup Final NHL championship series was contested by the New York Rangers and the Detroit Red Wings. It was the Rangers’ first appearance in the Final since their Stanley Cup victory in 1940. The Red Wings would win the series 4-3 to mark their franchise’s fourth Cup win, and first since 1943.