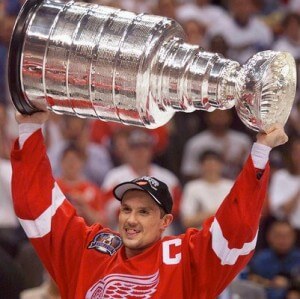 Stanley Cup – 1997
The 1997 Stanley Cup Final NHL championship series was contested by the Detroit Red Wings and the Philadelphia Flyers. Detroit was in the Final for the second time in three years (the other coming in 1995, when they lost to the New Jersey Devils) while the Flyers were making their first appearance since losing in the 1987 Final. Detroit won the series in four games to win the Stanley Cup for the eighth time in franchise history and the first time since 1955. Detroit was the last team to win the Cup without having home ice advantage in the Finals and with fewer than 100 points earned during the regular season until 2009.