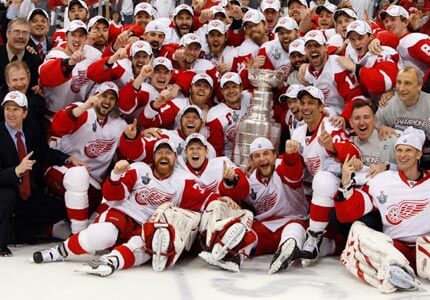 Stanley Cup – 2002
The 2002 Stanley Cup Finals was the NHL championship best-of-seven series of the 2002 Stanley Cup Playoffs contested by the Western Conference champion Detroit Red Wings and the Eastern Conference champion Carolina Hurricanes. It was Detroit’s twenty-second appearance in the Final, their previous appearance being a win in 1998. It was Carolina’s first appearance in the Final in franchise history. Detroit defeated Carolina in five games to win their tenth Stanley Cup championship in franchise history. The Red Wings became the first team in NHL history to win the Cup after starting the playoffs with two losses at home. After losing the first two games in the Conference Quarterfinals to the Vancouver Canucks, the Red Wings then won 16 of their next 21 games en route to win their third Cup since 1997 for coach Scotty Bowman. Bowman’s win, his ninth, established a new coaching record, surpassing the mark he held with Montreal coach Toe Blake.