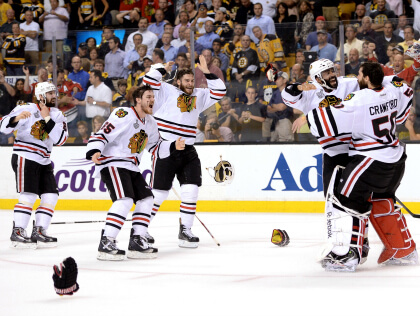 The 2013 Stanley Cup Finals was the championship series of the National Hockey League (NHL) 2012–13 season, and the conclusion of the 2013 Stanley Cup playoffs. This was the 120th year of the Stanley Cup’s presentation. The Western Conference playoff champion Chicago Blackhawks defeated the Eastern Conference playoff champion Boston Bruins in six games to win their fifth Stanley Cup in team history. The Blackhawks also became just the eighth team to win both the Cup and the Presidents’ Trophy as the team with the best regular season record in the same season. Chicago’s Patrick Kane was awarded the Conn Smythe Trophy as the Most Valuable Player of the playoffs.