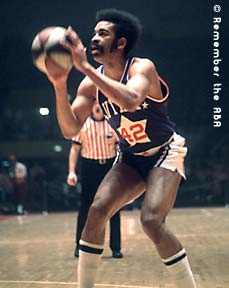 Despite the Stars’ demise, Salt Lake City had proven it could support big-time professional basketball. With this in mind, in 1976 the owners of the Spirits of St. Louis announced that they were moving the team to Utah for the 1976 – 1977 ABA season, to play as the Utah Rockies. However, this was undone when the ABA–NBA merger closed in June 1976 and the Spirits and the Kentucky Colonels were the only two teams left out of the merged league. (The Virginia Squires were folded shortly after the end of the regular season due to their inability to make good on a required league assessment, though there was no chance of them being part of a merger deal in any event).