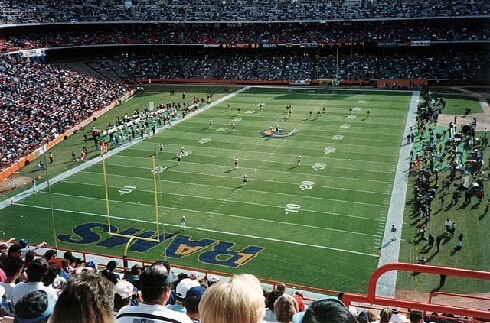 Prior to their 1979 Super Bowl season, owner Carroll Rosenbloom drowned in an accident; his widow, Georgia Frontiere, inherited 70% ownership of the team. Frontiere fired her step-son, Steve Rosenbloom, to assume total control of the franchise. As had been planned prior to Carroll Rosenbloom’s death, the Rams moved from their longtime home at the L.A. Coliseum to Anaheim Stadium in nearby Orange County, in 1980. The reason for the move was twofold; first, attendance. L.A. Memorial Coliseum was more difficult to sell-out than stadiums in other NFL cities because of its abnormally large seating capacity (100,000); and, Pete Rozelle—who had since become NFL Commissioner—created a ‘black-out rule’ preventing any home game that wasn’t sold-out 72 hours before kickoff from being broadcast in its local TV market. Second, the Southern California’s population patterns were changing: there was a rapid growth in L.A.’s affluent suburbs (e.g., greater Orange County), and a decline in the city of Los Angeles’ citizenship and earning power. Anaheim Stadium was originally built in 1965 as the home of the California Angels Major League Baseball franchise. To accommodate the Rams’ move, the ballpark was reconfigured with luxury suites and enclosed to accommodate crowds of about 65,000 for football.