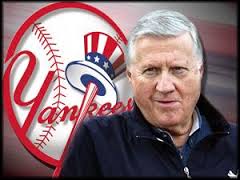 The Yankees had been struggling during their years under CBS ownership, which had acquired the team in 1965. In 1972, CBS Chairman William S. Paley told team president E. Michael Burke the media company intended to sell the club. As Burke later told writer Roger Kahn, Paley offered to sell the franchise to Burke if he could find financial backing. Steinbrenner, who had participated in a failed attempt to buy the Cleveland Indians from Vernon Stouffer one year earlier, was brought together with Burke by veteran baseball executive Gabe Paul.

On January 3, 1973, Steinbrenner and minority partner Burke led a group of investors, which included Lester Crown, John DeLorean and Nelson Bunker Hunt, in purchasing the Yankees from CBS. For years, the selling price was reported to be $10 million. However, Steinbrenner later revealed that the deal included two parking garages that CBS had bought from the city, and soon after the deal closed, CBS bought back the garages for $1.2 million. The net cost to the group for the Yankees was therefore $8.8 million.

From 2006 to his death, George Steinbrenner spent most of his time in Tampa, Florida. After the 2007 season and the decision not to bring back manager Joe Torre, Steinbrenner was in poor enough health that he officially retired and handed control of the Yankees to his sons Hank and Hal Steinbrenner. Hank in particular shows similar traits to his father.