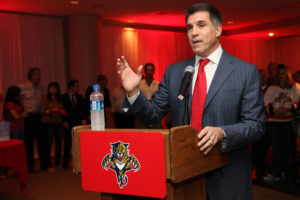 Despite media reports saying Vincent Viola paid between $230 million and $250 million for the Panthers, operating rights to the BB&T Center and other Sunrise Sports & Entertainment entities in 2013, the West Point graduate actually paid an enterprise value of closer to $160 million. With the Panthers hampered by low attendance, Viola and his partner, Doug Cifu, have said the team’s future in Florida is uncertain because of the huge losses suffered by the team and arena. The owners say they are losing more than $20 million a year and need more public funds to survive. The struggling team is asking for a rewrite of its contract with Broward County and want the county to use additional tourism taxes to pick up $70 million in BB&T Center costs currently being paid by the Panthers.