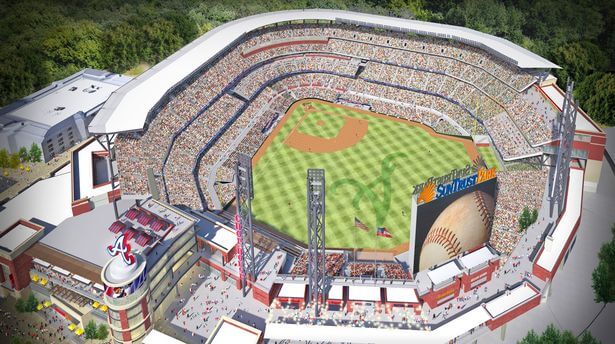 The stadium will be in Cumberland (also known as Cumberland/Galleria area), a fast-growing edge city in southeastern Cobb County. The ballpark will be located next to the highway interchange between Interstate 75 and Interstate 285. The stadium will have an Atlanta address due to its location in ZIP code 30339, which is shared with the neighboring community of Vinings. The United States Postal Service considers this area to be unincorporated Atlanta. The Braves say the location is “near the geographic center of the Braves’ fan base.”

The team announced at the stadium’s groundbreaking that the naming rights were sold to SunTrust Banks for a 25-year partnership. Braves officials anticipate a capacity of about 41,500, which is approximately 8,000 fewer than Turner Field.