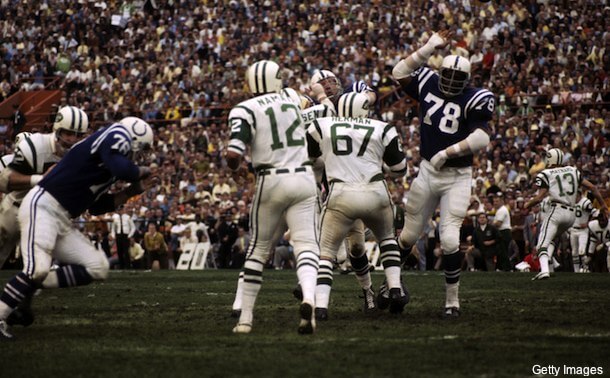 Super Bowl III was the third AFL-NFL Championship Game in professional American football, the first to officially bear the name “Super Bowl.” The game, played on January 12, 1969, at the Orange Bowl in Miami, Florida, is regarded as one of the greatest upsets in American sports history. The heavy underdog American Football League (AFL) champion New York Jets defeated the National Football League (NFL) champion Baltimore Colts by a score of 16–7. This was the first Super Bowl victory for the AFL. Undaunted, Jets quarterback Joe Namath made an appearance three days before the Super Bowl at the Miami Touchdown Club and brashly guaranteed a victory. His team backed up his words by controlling most of the game and built a 16–0 lead through the fourth quarter off of a touchdown run by Matt Snell and three field goals by Jim Turner. Colts quarterback Earl Morrall threw three interceptions before being replaced by Johnny Unitas, who then led Baltimore to its only touchdown during the last few minutes of the game. Namath, who completed 17 out of 28 passes for 206 yards, was named the Super Bowl’s Most Valuable Player, despite not throwing a touchdown pass in the game or any passes at all in the fourth quarter.