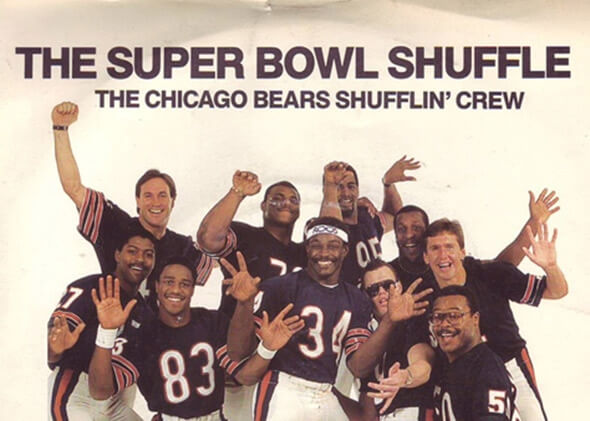 Super Bowl XX – 1985
Mike Ditka, a tight end for the Bears from 1961 to 1966, was hired to coach the team by George Halas in 1982. His gritty personality earned him the nickname “Iron Mike.” In the 1985 season, the fire in the Bears-Packers rivalry was relit when Ditka used 315-pound defensive tackle “Refrigerator” Perry as a running back in a touchdown play at Lambeau Field, against the Packers. The Bears won their ninth NFL Championship, first since the AFL-NFL merger, in Super Bowl XX after the 1985 season in which they dominated the NFL with their then-revolutionary 46 defense and a cast of characters that recorded the novelty rap song “The Super Bowl Shuffle”. The season was notable in that the Bears had only one loss, the “unlucky 13th” game of the season, a Monday night affair in which they were defeated by the Miami Dolphins. At the time, much was made of the fact that the 1972 Dolphins were the only franchise in history to have had an undefeated season and post-season. The Dolphins came close to setting up a rematch in the Super Bowl but lost to the New England Patriots in the AFC title game. “The Super Bowl Shuffle” was videotaped the day after that Monday night loss in Miami.