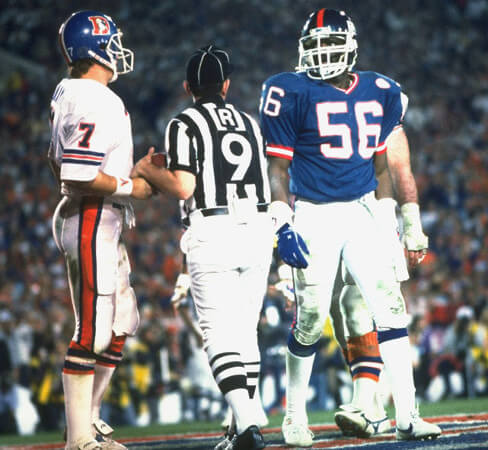 After 9–7 and 10–6 finishes in 1984 and 1985 respectively, the Giants compiled a 14–2 record in 1986 led by league MVP and Defensive Player of the Year Lawrence Taylor and the Big Blue Wrecking Crew defense. As of 2012, this is the Giants’ best regular-season record since the NFL began playing sixteen-game seasons in 1978. After clinching the top seed in the NFC, the Giants defeated the 49ers 49–3 in the divisional round of the NFC playoffs and the Redskins 17–0 in the NFC championship game, advancing to their first Super Bowl, Super Bowl XXI, against the Denver Broncos at the Rose Bowl in Pasadena. Led by MVP Simms who completed 22 of 25 passes for a Super Bowl record 88% completion percentage, they defeated the Broncos 39–20, to win their first championship since 1956.