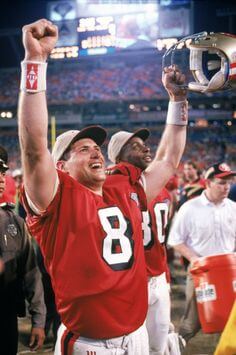 The 49ers defeated the Chargers by the score of 49–26, becoming the first team to win five Super Bowls. The game was played on January 29, 1995 at Joe Robbie Stadium in Miami, Florida (now part of the suburb of Miami Gardens). This game is regarded as 49ers quarterback Steve Young’s final leap out of the shadow of his predecessor, Joe Montana, who had won four Super Bowls with the 49ers (in 1982, 1985, 1989, and 1990), two with Young as the backup quarterback. With Young at the helm, and a defense consisting of several veteran free agents that joined the team during the previous off-season, San Francisco finished the regular season with a league-best 13–3 record, and led the league in total points scored (505). The Chargers, on the other hand, were regarded as a “Cinderella” team, and advanced to their first Super Bowl after posting an 11–5 regular season record and overcoming halftime deficits in both their playoff wins.