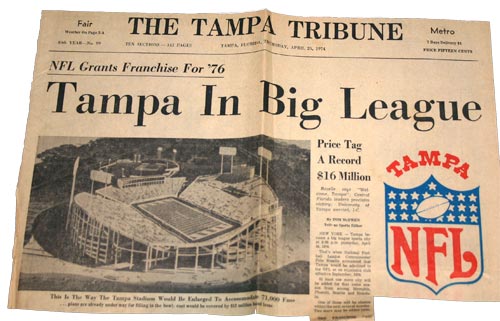 Expansion of the National Football League to twenty-eight teams was an agreed part of the AFL/NFL merger of 1970 and confirmed at the end of that season, but attempts to carry it out did not materialize until after the 1973 season, when it was announced that Tampa would be the first city to get an expansion franchise, at a cost of $16,000,000 which even then was considered a “paltry” sum. Originally the proposed Tampa Bay expansion franchise was awarded to Tom McCloskey, a construction company owner from Philadelphia. McCloskey quickly became dissatisfied with the financial arrangement with the NFL and backed out of the deal a month later. Hugh Culverhouse, a wealthy tax attorney from Jacksonville, who had failed in his bid to buy the Los Angeles Rams due to an unannounced sale to Robert Irsay, instead received the Tampa franchise.

A name-the-team contest resulted in the name “Buccaneers,” a reference to the pirates who frequented Florida’s Gulf coast during the seventeenth century, and which was almost immediately shortened to the familiar “Bucs”. The team’s first home was Tampa Stadium, which had recently been expanded to seat just over 72,000 fans.