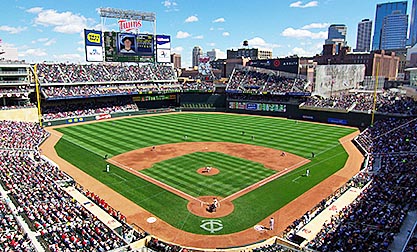 In response to the threatened loss of the Twins, the Minnesota private and public sector negotiated and approved a financing package for a replacement stadium a baseball-only outdoor, natural turf ballpark in the Warehouse District of downtown Minneapolis owned by a new entity known as the Minnesota Ballpark Authority. Target Field was constructed at a cost of $544.4 million (including site acquisition and infrastructure), utilizing the proceeds of a $392 million public bond offering based on a 0.15 percent sales tax in Hennepin County and private financing of $185 million provided by the Pohlad family. As part of the deal, the Twins also signed a 30-year lease of the new stadium, effectively guaranteeing the continuation of the team in Minnesota for a long time to come. Construction of the new field began in 2007, and was completed in December 2009, in time for the 2010 season.