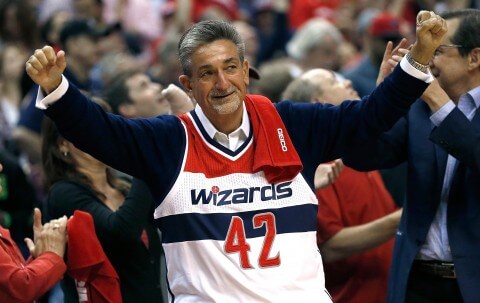 Leonsis became the majority owner of the Washington Wizards in June 2010, inheriting a team that had 26 wins and 56 losses during the previous season. Leonsis has taken a fan-centric approach to run the franchise, by listening and responding to the concerns of Wizards supporters through his email and personal website. On May 10, 2011, the Wizards unveiled a new color scheme, uniforms, and logo. The team reverted to its traditional red, white, and blue colors. The uniforms are based very closely on those worn from 1974 to 1987, during the team’s glory years. During Leonsis’ tenure as owner, the Wizards have compiled a promising young nucleus of players, including John Wall (No. 1 pick in the 2010 NBA Draft), Bradley Beal (No. 3 pick in the 2012 NBA Draft), and Otto Porter Jr. (No. 3 pick in the 2013 NBA Draft). They have also acquired veterans like Nenê and Marcin Gortat via trade.