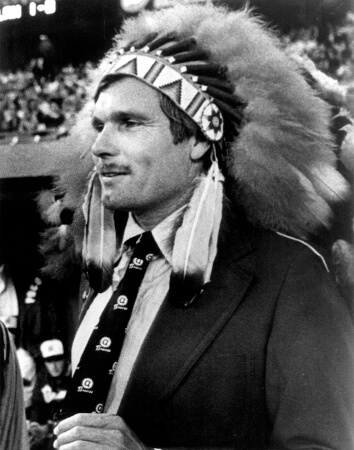 In 1976, the team was purchased by media magnate Ted Turner, owner of superstation WTBS, as a means to keep the team (and one of his main programming staples) in Atlanta. The financially strapped Turner used money already paid to the team for their broadcast rights as a down-payment. It was then that Atlanta Stadium was renamed Atlanta-Fulton County Stadium. Turner quickly gained a reputation as a quirky, hands-on baseball owner.

Turner used the Braves as a major programming draw for his fledgling cable network, making the Braves the first franchise to have a regular, nationwide audience and fanbase. WTBS marketed the team as “The Atlanta Braves: America’s Team”, a nickname that still sticks in some areas of the country, especially the South, today. Among other things, in 1976 Turner suggested the nickname “Channel” for pitcher Andy Messersmith and jersey number 17, in order to promote the television station that aired Braves games. Major League Baseball quickly nixed the idea.