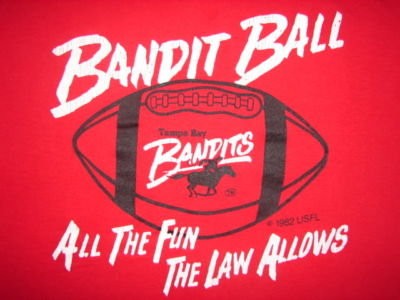 Bandits’ majority owner John Bassett was a strong proponent of the “Dixon Plan”, which was a plan formulated by the USFL’s founding owners that sought to build a sustainable league with budgetary restraint and a commitment to spring football. However, to gain a competitive advantage and draw attention to their teams, some owners attempted to sign more high-profile players to free agent contracts, sometimes engaging in bidding wars against more financially powerful NFL teams. This led to USFL teams losing substantial amounts of money, causing much instability throughout the league. The Bandits did not overspend on player contracts, keeping the franchise stable but making it difficult to compete with the USFL’s higher spending teams.

In April 1985, the USFL (led by New Jersey Generals owner Donald Trump) voted 12-2 to switch to a fall schedule for 1986, hoping to compete directly with the NFL and possibly force the more established league to accept a merger. Bassett, who had registered one of the two “nay” votes, immediately declared his intention to pull the Bandits out of the USFL and organize a new spring football league.

However, by mid-1985, the Bandits’ ownership group was in disarray. Bassett was diagnosed with brain cancer, and by mid-1985, staffers suspected that his illness was impairing his judgment. Stephen Arky, one of the other major shareholders in the Bandits, committed suicide. The team began signing mediocre players (most infamously defensive back Bret Clark) to large contracts, and plans for a new spring football league were abandoned. As his condition worsened, Bassett decided to sell the team. He died from cancer in May 1986.

In August 1985, minority owner Lee Scarfone, a local architect, agreed to purchase Bassett’s and Arky’s stakes and field a team in the USFL for the fall 1986 season, with Tony Cunningham coming on as an additional partner. However, the league could not secure a TV contract for its new fall schedule (while declining broadcast contracts to continue playing in the spring) and had difficulty finding inves