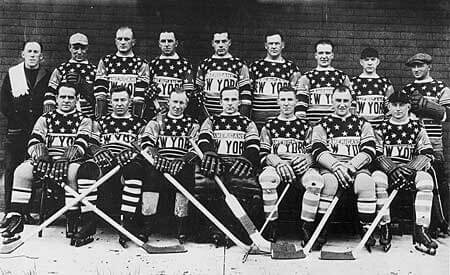 In April of 1925, Duggan and Bill Dwyer, New York City’s most-celebrated prohibition bootlegger, were awarded the franchise for New York. Somewhat fortuitously given the shortage of players, the Hamilton Tigers, who had finished first the season before, had been suspended from the league after they struck for higher pay. However, the suspensions were quietly lifted in the off-season. Soon afterward, Dwyer duly bought the collective rights to the Tiger players for $75,000.He gave the players healthy raises—in some cases, double their 1924 – 1925 salaries. Just before the season, Dwyer announced his team would be named the New York Americans. Their original jerseys were covered with stars and stripes, patterned after the American flag.[1] Although he acquired the Tigers’ players, Dwyer did not acquire the franchise; it was expelled from the league. As a result, the NHL does not consider the Americans to be a continuation of the Tigers—or for that matter, of the Tigers’ predecessors, the Quebec Bulldogs. The Americans entered the league in the 1925 – 1926 season along with the Pittsburgh Pirates. The Americans and Pirates became the second and third American-based teams in the NHL, following Adams’ Boston Bruins, who began play the previous season.