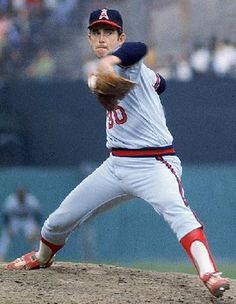 During the 1970s, although Angel fans endured some mediocre years on the field they also were able to enjoy the heroics of fireballer Nolan Ryan, who tossed four of his seven no-hitters as an Angel. He also set several strikeout records throughout his career, most notably a 383-strikeout mark in 1973, still a major league record. Ryan was acquired in a trade that sent Jim Fregosi to the Mets. Ryan had been a middle relief pitcher on the “Miracle Mets” team that captured the 1969 World Series. Ryan’s feats caused him to be named the Ryan Express, after the 1965 film Von Ryan’s Express, which starred Frank Sinatra. His prowess, combined with that of fellow moundsman Frank Tanana, produced the refrain, “Tanana, Ryan and Two Days of Cryin'”, a derivative of the refrain, “Spahn and Sain, then pray for rain”, coined when Warren Spahn and Johnny Sain anchored the pitching staff of the then Boston Braves in the 1940s.

Ironically, the 1970s came to a close with the decision by then-general manager Buzzie Bavasi to allow Ryan to become a free agent. At the time, Bavasi remarked that Ryan, whose 1979 record was 16–14 (Ryan was 26–27 under Bavasi), could be replaced “with two pitchers who go 8–7.” Bavasi later admitted this was “the worst mistake I ever made in all my years in baseball.