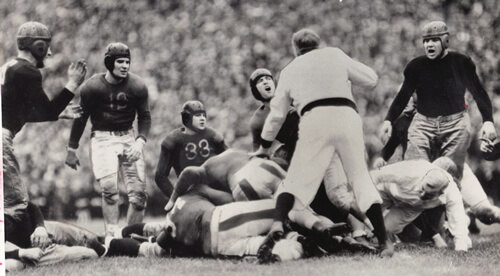 The Tigers and Wildcats amalgamated in 1950 to form the Hamilton Tiger-Cats that would compete in the IRFU. Under the guidance of prominent and distinguished local leaders such as Ralph “Super-Duper” Cooper and F.M. Gibson, it was decided that the two teams should merge as one that would represent Hamilton. Cooper was named team president and Carl Voyles served as head coach and general manager. A contest was held among the fans to determine the colors for the newly formed football club; the result was a combination of the two clubs’ colors: yellow, black, red, white and blue. Over the years, the colors have evolved to gold, black and white and remain to this day. In 1950, the Hamilton Tiger-Cats began playing in Ivor Wynne Stadium, until 2012 after which it was demolished and replaced with a new stadium on the same site, Tim Hortons Field, in 2014.