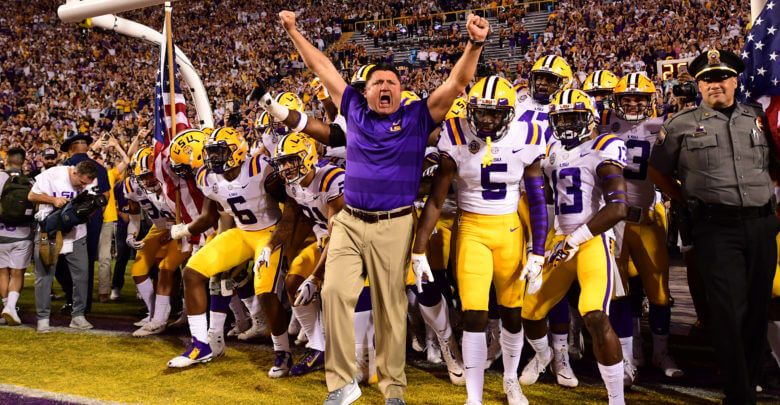 By winning the Peach Bowl, LSU advanced to the College Football Playoff National Championship to play the winner of the Fiesta Bowl, third-seeded Clemson. The game was played at the Mercedes-Benz Superdome in New Orleans, mirroring LSU’s previous appearances in national championship games in 2012, 2008, and 2004. Clemson was the defending national champion and on a 29-game winning streak, but LSU was considered a 5.5-point betting favorite heading into the game.

To open the game, both teams were forced to punt on each of their first two possessions. Clemson opened the scoring with a one-yard touchdown run by quarterback Trevor Lawrence. LSU evened the score with a 52-yard touchdown pass from Joe Burrow to Ja’Marr Chase. Early in the second quarter, Clemson regained the lead with a 52-yard field goal by B.T. Potter, and then extended the lead on their next possession with a 36-yard touchdown pass from Lawrence to Tee Higgins. LSU scored touchdowns on their next three possessions to close out the first half: first on a three-yard run by Burrow, then a 14-yard pass from Burrow to Chase, and then a six-yard pass from Burrow to Thaddeus Moss with 10 seconds remaining in the half. The score was 28–17 LSU at half-time.

With the win, LSU finished as undefeated College Football Playoff champions and was later crowned unanimous national champions by the polls. This was LSU’s fourth claimed the national title in school history, and first since the 2007 season. It was their first undefeated season since 1958, and the second-ever 15–0 season by any FBS team in the modern era (after Clemson the previous season). Joe Burrow had 463 passing yards and five touchdowns in the game and was named Offensive MVP. Linebacker Patrick Queen had eight total tackles, including 0.5 sacks and 2.5 tackles for loss, and was named Defensive MVP.