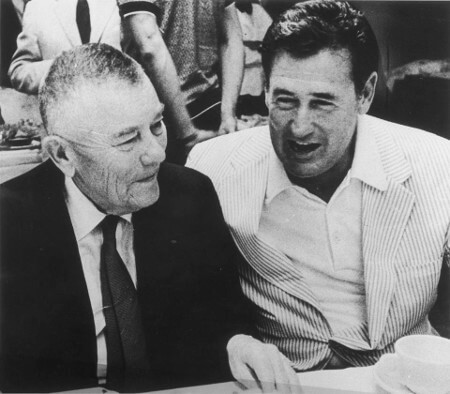 Four days after his 30th birthday, Yawkey bought the Red Sox for $1.2 million on the advice of his longtime friend, former A’s second baseman and superstar hitter Eddie Collins. The Red Sox had been the dregs of the American League for more than a decade since the infamous Babe Ruth sale to the Yankees by former owner Harry Frazee before the 1920 season and had just come off a dreadful 111-loss season in 1932 which is still the worst in franchise history. Yawkey hired Collins as general manager with instructions to buy up as much talent as possible to turn the team around. He also heavily renovated Fenway Park, which had fallen into disrepair over the years. Yawkey devoted his time and finances for the rest of his life to building winning teams. His teams’ best seasons occurred in 1946, 1967 & 1975, when the Red Sox captured the American League pennant but then went on to lose each World Series in seven games, against the St. Louis Cardinals in (1946 & 1967) and the Cincinnati Reds in (1975). He would never achieve his ultimate goal of winning a world championship.