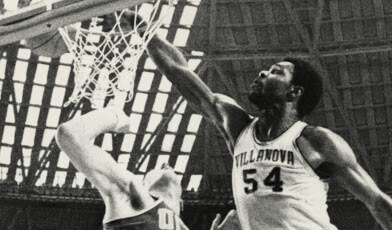 Porter then played collegiately at Villanova University, where he was a three-time All-America selection. He took Villanova to the 1971 NCAA Championship Game, in which Villanova lost to UCLA 68-62. Porter was named the tournament’s Most Outstanding Player after scoring 25 points in the final game. However, he was later ruled ineligible for the honor because he had signed a professional contract with the Pittsburgh Condors of the American Basketball Association during the middle of his senior year. To the present day, the MOP for the 1971 Final Four is listed as “*Vacated.”