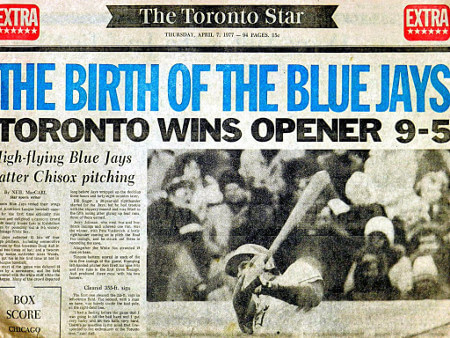 The City of Toronto had renovated Exhibition Stadium to accommodate Major League Baseball (MLB), in anticipation of the Giants relocating there, and continued to push for an MLB franchise. MLB awarded the City of Toronto an expansion franchise in 1976, along with Seattle, Washington. A group, headed by Labatt Breweries, with Imperial Trust and CIBC as minority owners, purchased the rights for the franchise from MLB for $7 million.

However, even after the franchises were awarded, the future of baseball in Toronto appeared uncertain. U.S. President Gerald Ford had attempted to put pressure on MLB to give Washington, D.C. an expansion franchise instead of Toronto. Washington had been without Major League Baseball since the Senators were moved to Arlington, Texas to become the Texas Rangers following the 1972 season. Following this development there was brief speculation by Metro Toronto chairman Paul Godfrey, among others, that Washington would be awarded Toronto’s American League franchise and Toronto would instead be awarded a National League expansion franchise. However, Ford’s attempts did not amount to anything and Toronto was allowed to keep its American League expansion franchise.