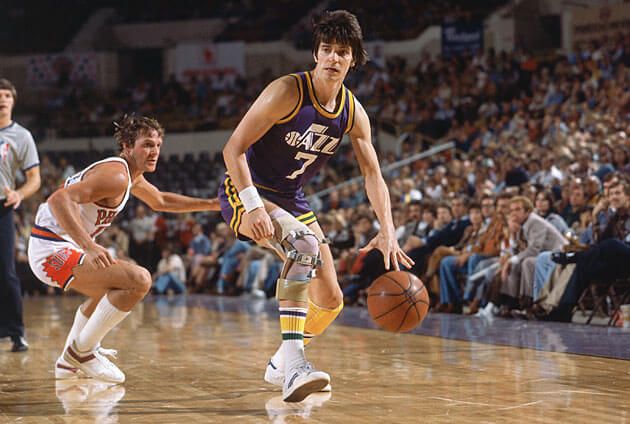 In the summer of 1974, an expansion franchise was preparing for its first season of competition in the NBA. The New Orleans Jazz were looking for something or someone to generate excitement among their new basketball fans. With his exciting style of play, Maravich was seen as the perfect man for the job. Additionally, he was already a celebrity in the state due to accomplishments at LSU. To acquire Maravich, the Jazz traded two players and four draft picks to Atlanta.

The expansion team struggled mightily in its first season. Maravich managed to score 21.5 points per game, but shot a career-worst 41.9 percent from the floor. The Jazz posted a 23–59 record, worst in the NBA.

Jazz management did its best to give Maravich a better supporting cast. The team posted a 38–44 record in its second season (1975 – 1976) but did not qualify for postseason play, despite the dramatic improvement. Maravich struggled with injuries that limited him to just 62 games that season, but he averaged 25.9 points per contest (third behind Macadoo and Kareem Abdul-Jabbar) and continued his crowd-pleasing antics. He was elected to the All-NBA First Team that year.

The following season (1976 – 1977) was his most productive in the NBA. He led the league in scoring with an average of 31.1 points per game. He scored 40 points or more in 13 different games, and 50 or more in 4 games. His 68-point masterpiece against the Knicks was at the time the most points ever scored by a guard in a single game, and only two players at any position had ever scored more: Wilt Chamberlain and Elgin Baylor.[25] Baylor was head coach of the Jazz at that time.