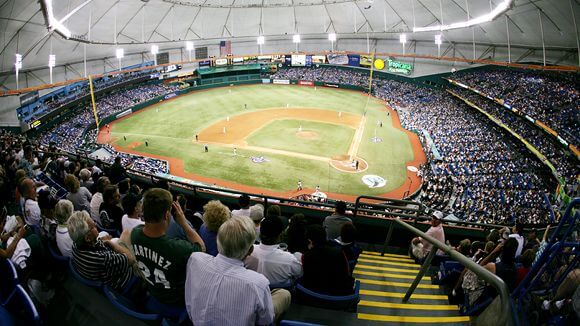 Tropicana Field (originally Florida Suncoast Dome and formerly Thunderdome) is a domed stadium in St. Petersburg, Florida that has been the home of Major League Baseball’s Tampa Bay Rays since the team’s inaugural season in 1998, when they were the Devil Rays. It is currently the only domed stadium in Major League Baseball that is not retractable. Tropicana Field is the smallest MLB stadium by seat capacity with tarp-covered, obstructed-view seats.

Just over the right-center field fence is the Rays Touch Tank. This 35-foot, 10,000-gallon tank is filled with cow nose rays that were taken from Tampa Bay waters. Admission to the tank area is free for all fans attending home games, but there is a limit of 50 people in the area at any given time. Not only do fans get to see the rays up close and get an education about them, but they are allowed to feed them as well.