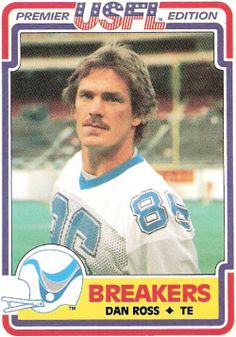 The Breakers were one of nine teams slated to play in the USFL’s first fall season and were slated to be one of only two teams west of the Mississippi River. However, they had only drawn 19,919 per game, nowhere near enough to break even. After talks to merge with other teams failed, Canizaro folded the franchise while the USFL’s antitrust suit against the NFL was underway, citing over $17 million in losses over three years.

Canizaro was the only league owner who moved his team twice and both moves were tremendous distances. There was some discussion of transplanting the Denver Gold organization to Portland, but this idea was ultimately abandoned as the Gold (whose owners opposed moving to the fall) instead merged with the Jacksonville Bulls. The entire league suspended operations not long afterward after it was awarded only $3 in damages.

The Breakers had the distinction of being the only team to play for the entire duration of the USFL for three different cities, each season in a different city without relocating mid-season. Unlike many USFL teams, the Breakers never changed their name, logo, or colors when they relocated.