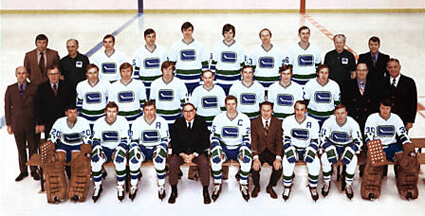 Less than a year later, the Oakland Seals were in financial difficulty and having trouble drawing fans. An apparent deal was in place to move the team to Vancouver, but the NHL did not want to see one of their franchises from the expansion of 1967 move so quickly and killed the deal. In exchange for avoiding a lawsuit, the NHL promised Vancouver would get a team in the next expansion. Another group, headed by Minnesota entrepreneur Tom Scallen, made a new presentation and was awarded an expansion franchise for the price of $6 million, three times the cost in 1967. The new ownership group purchased the WHL Canucks, and joined the league along with the Buffalo Sabres for the 1970 – 1971 season.