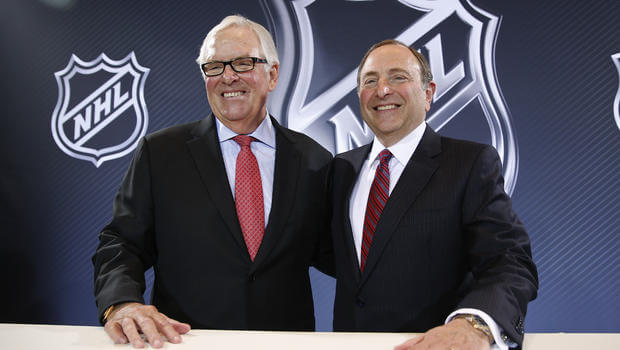 Leading into the league owners’ meetings and the NHL Awards ceremony held on June 22, 2016, the Associated Press reported that Las Vegas had won an expansion bid and that terms for the 2017 NHL Expansion Draft were being finalized. During a press conference later that day, Gary Bettman officially announced that the expansion franchise had been awarded to Las Vegas, and would begin to play in the 2017–18 NHL season. It was the only expansion bid approved, with its Quebec rival “deferred” to a later date. The league also confirmed that an expansion draft would be held to populate the roster of the new team; Bettman stated that due to the larger number of players that would be potentially available to the team in comparison to that of the previous expansion draft in 2000, the team “will have a roster that will be competitive more quickly than prior expansions”.

With the official approval of the Las Vegas expansion bid, Foley has committed to giving $500 million to help fund the team and stated that the public would begin to “see a lot of action in the next 30 to 45 days”, as the team begins the process of hiring its principal staff (as assisted by Murray Craven) and determining its official identity, among other developments. Foley announced that former Washington Capitals general manager George McPhee would become the franchise’s GM. Foley has also begun the process of pursuing a regional television rights holder for the team but has also considered starting a dedicated regional sports network for it. On August 2, 2016, Kelly McCrimmon, owner of the WHL’s Brandon Wheat Kings, was hired as the team’s assistant general manager. The team is the first major professional sports franchise to be based in Las Vegas, and the first NHL expansion team since 2000.