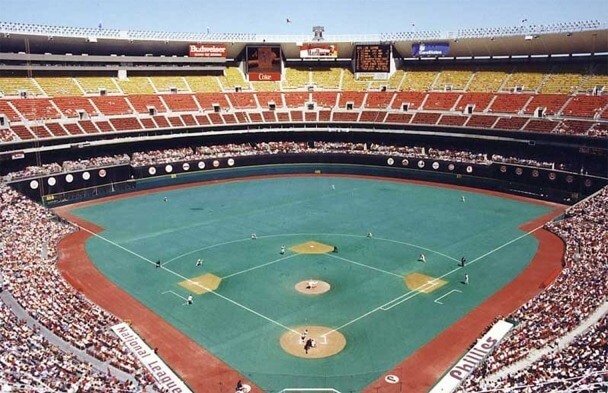 By the late 1950s, Carpenter decided that the Phillies needed a new home. As mentioned above, he never wanted to buy Connie Mack Stadium in the first place and was now convinced there was no way he could make money playing there. The stadium didn’t have nearly enough parking, and the neighborhood around it had already gone to seed. To that end, he sold the park to Philadelphia Eagles owner Jerry Wolman in 1964, taking a million-dollar loss on his purchase of just 10 years earlier. The Phillies remained at the old stadium until 1970. In the last game played there, the Phillies avoided the last place by beating the Expos 2–1.

The Phillies opened the new Veterans Stadium in 1971, with hopes of a new beginning. In their first season there, pitcher Rick Wise hurled a no-hitter. On September 18, 1971, Wise pitched another near-perfect game, in which he gave up a home run to the Chicago Cubs’ leadoff batter in the second inning, but then did not allow another baserunner until the 12th inning, with two outs. He had been perfect for 10 2⁄3 retiring 32 consecutive batters—the record for most consecutive outs in a game by a winning pitcher. That same season, Harry Kalas joined the Phillies broadcasting team. In 1972, the Phillies were the worst team in baseball, but newly acquired Steve Carlton won nearly half their games (27 of 59 team wins). In that same year, Bob Carpenter retired and passed the team ownership to his son Ruly.