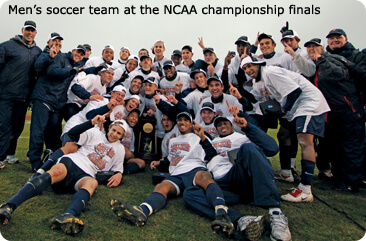 The 2009 NCAA Division I Men’s Soccer Tournament was a tournament of 48 teams from NCAA Division I who played for the NCAA Championship in soccer. The semifinals and final were held at WakeMed Soccer Park in Cary, North Carolina. All the other games were played at the home field of the higher-seeded team (indicated by * for non-seeded teams). The final was held on December 13, 2009, with Virginia defeating Akron, 3–2 in a penalty shoot-out, following a goalless regulation and two overtimes.