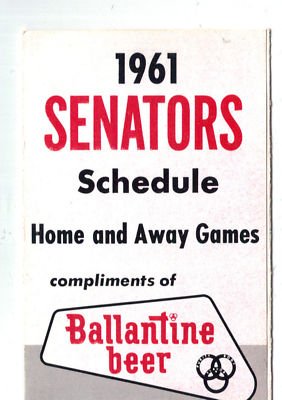 This new team adopted the old Senators name, but was (and still is) considered an expansion team since the Twins retained the old Senators’ records and history. The Senators and Angels began to fill their rosters with American League players in an expansion draft. The team played the 1961 season at old Griffith Stadium before moving to District of Columbia Stadium (now the Robert F. Kennedy Memorial Stadium). Ownership changed hands several times during the franchise’s stay in Washington and was often plagued by poor decision-making and planning. Owner Elwood Richard Quesada once wondered why he needed to pay players who didn’t belong in the majors and later agreed to a 10-year lease at D.C. Stadium a move that would come back to haunt the Senators. In 1963, Quesada sold his stake in the club and resigned. Washington stockbrokers James Johnston and James Lemon owned the team briefly, suffering massive financial losses. Johnson died in 1967 and Lemon sold the team a year later to hotel and trucking executive Bob Short, who outbid a group headed by Bob Hope. Short named himself general manager and hired Hall of Famer Ted Williams as manager. Although Williams had never coached or managed at any level of baseball, he seemed to light a spark under the once-moribund Senators. Williams kept them in contention for most of the season; their 86–76 record would be its only winning season in Washington.