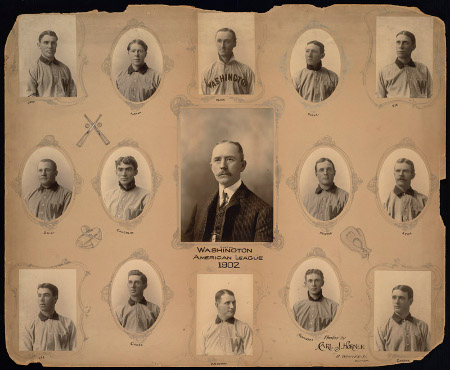 When the American League declared itself a major league in 1901, the new league moved the previous Western League’s Kansas City franchise to Washington, a city that had been abandoned by the National League a year earlier. The Washington club, like the old one, would be called the Senators.

The Senators began their history as a consistently losing team, at times so inept that San Francisco Chronicle columnist Charley Dryden joked: “Washington: First in war, first in peace, and last in the American League.” The 1904 Senators lost 113 games, and the next season the team’s owners, trying for a fresh start, changed the team’s name to the Nationals. The Senators’ name remained widely used by fans and journalists, in fact, the two names were used interchangeably although “Nats” remained the team’s nickname. The Senators’ name was officially restored in 1956.