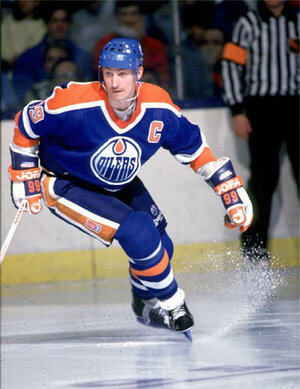 Gretzky break his own assists record three more times (125 in 1982–83, 135 in 1984–85, and 163 in 1985–86); he also bettered that mark (120 assists) in 1986–87 with 121 and 1990–91 with 122, and his point record one more time (215, in 1985–86). By the time he finished playing in Edmonton, he held or shared 49 NHL records, which in itself was a record. The Edmonton Oilers finished first overall in their last WHA regular season. The same success was not immediate when they joined the NHL, but within four seasons, the Oilers were competing for the Stanley Cup. The Oilers were a young, strong team featuring, in addition to Gretzky, future Hall of Famers including forwards Mark Messier, Glenn Anderson and Jari Kurri, defenceman Paul Coffey, and goaltender Grant Fuhr. Gretzky was its captain from 1983–88. In 1983, they made it to the Stanley Cup Final, only to be swept by the three-time defending champion New York Islanders. The following season, the Oilers met the Islanders in the Final again, this time winning the Stanley Cup, their first of five in seven years.