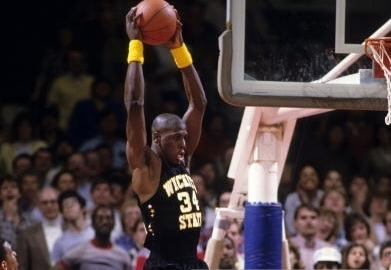 While at Wichita State, McDaniel was the first person to lead the nation in both rebounding and scoring in the same season. In college, McDaniel began to shave both his head and his eyebrows to look more intimidating. He continued this all throughout his pro career.

For his first two seasons at Wichita State, the Shockers were on NCAA probation. He was a teammate in his freshman year of future NBA players Antoine Carr and Cliff Levingston. When Levingston left for the NBA, McDaniel became a starter and averaged 18.8 points and 14.4 rebounds as power forward opposite Carr. The following season, Carr left, and McDaniel raised his scoring average to 20.6 points per game and was the Missouri Valley Conference MVP. He then led the nation in scoring (27.4) and rebounding (15.0) his senior season becoming the first player to do so.